News that Steven Tyler, the lead singer for Aerosmith, is in line to be a judge on Fox’s American Idol next season is bringing back memories of my brief encounter with the flamboyant entertainer back in 1983.

At the time, I was a music editor for The Aquarian Weekly, and Aerosmith was coming to New Jersey to play a concert at the Meadowlands. A few weeks before the concert, the band’s publicist called and asked if we could do a cover story about the group and have it appear the week before the show. I said we could do it, but we had to have an interview with Tyler because he was the leader of the group and the most outspoken and well-known member of the band. The publicist agreed and promised to set up the interview. But as our deadline approached, the interview had yet to be scheduled.

We went back and forth a lot. The publicist offered to arrange an interview with another member of the band. We said we would do that, but then the story would not run on the cover. Since she really wanted to get Aerosmith on the cover, she continued to promise that Tyler would do the interview, even as our first deadline passed. 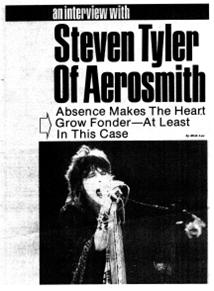 The story was supposed to be written and filed by a Friday. Although I had not even done the interview, we held space on the cover, based on a commitment from the publicist. She promised Tyler would call from the road sometime over the weekend so I could write the story and have it ready first thing Monday morning before we went to press. Without it, there would be a big blank hole on our cover.

Finally, on Saturday evening about 5:30, my home phone rang. It was Steven Tyler calling from Milwaukee and he was in no mood to do an interview. To put it politely, he was uncooperative. At times, he was outright belligerent. While we were talking, he was seemed to be more interested in ranting about the poor service he was getting at his hotel and the way his record company was treating him than he was with his music and the things I want to talk about.

When the interview was over, I barely had enough quotes to write any type of a story, let alone one we were going to feature on the cover. But I had no choice. We were way past deadline, and there was a hole on the cover that had to be filled.

So I sat down and wrote a narrative by doing a little research (long before the days of Google and the Internet) and piecing together what shreds of information I had to write a story which made the readers feel like they were right there when Steven Tyler and I spoke.

In my lead, I mentioned the time that we spoke because I knew when he had called me and I just adjusted it for the time difference in Milwaukee. I put in the name of the arena where he was headed by checking the band’s touring schedule to find out the name of the venue. I used some information I knew about the band, as well as other material I had received from the group’s record company and publicist. I also added a few of the other details picked up from his conversation about items such as the hotel service and his record company.

When I was done, I had produced a story that started like this:

The clock in Steven Tyler’s hotel room is approaching 5:30. In a few hours, he’ll be onstage in Milwaukee’s Mecca Auditorium, performing to another capacity crowd. But that’s the furthest thing from his mind right now. At the moment, Tyler’s only concern is the hassle he’s receiving from the hotel bell captain.

As the outspoken leader of Aerosmith, controversy is nothing new for Tyler. He recently made headlines by turning down an offer from Schlitz for sponsorship of the band’s current tour. (He said he’d agree to the deal if Schlitz let him put Aerosmith’s name on all its six packs.)

But that’s not all that concerns him.

Despite a string of eight consecutive gold albums, Tyler feels he’s misunderstood by the public, the press, his record company, even the bell captain in his hotel.

Considering the circumstances, I was fairly happy with the end product. The story read well, it ran on the cover, and everyone was happy.

As an epilogue, years later when I taught English at Mercer County Community College, I used my story about Steven Tyler as a way to show students how to construct a narrative essay – how a few shreds of information, a little research, some personal information, and a touch of poetic license could produce a piece that made readers feel like they were there.

On a personal note, the Steven Tyler story helped to build a rapport with my students. No longer was I just a professor teaching them the finer points of writing; I was someone who had spent time, limited though it be, with rock stars such as Tyler. Unfortunately, my story lost much of its luster as the years went on, my students got younger, and Tyler grew older. He was just an aging rock star to students who had a whole new crop of idols and celebrities.

Perhaps the younger generation’s perception of Steven Tyler will change once he starts appearing on American Idol, one of the nation’s highest-rated television programs. But it won’t do me any good; I don’t expect to be teaching English again. However, stranger things have happened. I am sure that, some 40 years ago when Tyler and the members of Aerosmith were performing in dingy bars and struggling to make it big, he never dreamed that someday entertainers would be able to launch successful careers by winning a talent contest on a reality television show — and that he would be one of the judges.