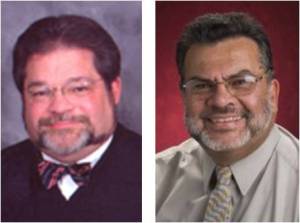 State Supreme Court Justice Roberto Rivera-Soto has not exactly distinguished himself on the bench, but I for one will be sad to see him go.

Back in 2004 after news reports appeared about then-Governor Jim McGreevey’s decision to nominate Rivera-Soto to the high court, the Governor had one of his aides call to “congratulate” me on my nomination. It seemed that, in the photos of Rivera-Soto that appeared with the news accounts, the new justice bore a resemblance to me. At the time, I was the Governor’s Deputy Press Secretary and the next few times McGreevey saw me, he called me “Justice” instead of Rich.

As for the resemblance, the photos are above and you can judge for yourself, but I will say this for Justice Rivera-Soto: Although his judicial career was a stormy one, he played his cards right today by announcing that he will not seek reappointment, thereby avoiding an embarrassing scenario that likely would have ensued since Governor Christie was not expected to re-nominate him. And because Christie’s only nominee to the Supreme Court is sitting in limbo as a result of a stalemate with the Legislature, much of the focus of the news accounts about Rivera-Soto’s departure has been on impasse between the Governor and the Legislature – not on the controversies that took place during his time on the bench.

Rivera-Soto even managed to garner some words of praise from the state’s chief executive.  “Your tenure on the court has been marked by a conscientious commitment to the rule of law, and enduring respect for the core principles of fairness decency and impartiality that support our legal system,” Christie wrote in a letter responding to the justice’s decision not to seek reappointment. “As the first Hispanic American to serve on our state’s highest court, you have used your historic appointment to provide an intelligent and balanced voice in each decision.”