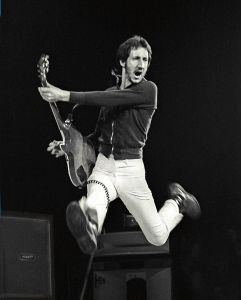 As the 50th anniversary of the Who’s Tommy approached, I devoted my WSBU-FM radio show to a musical look at how Tommy would fare as a presidential candidate.

Don’t laugh. Tommy has a compelling personal story that would work well on a campaign trail. Take a look.

(Click here to listen to my May 24 radio show about the presidential race or keep reading to learn what songs I played – and why.)

For starters, Tommy comes from a military family, as we learn from the words about his father at the end of the rock opera’s overture: Captain Walker didn’t come home. His unborn child will never know him. Believe him missing with a number of men. don’t expect to see him again.

Tommy’s powerful personal story will resonate with voters. As a child, he was a “deaf dumb and blind boy” who struggled to overcome multiple disabilities.

Because of his disabilities, Tommy missed out on the joys of Christmas because he “doesn’t even know what day it is.”

In addition to his physical challenges, Tommy was bullied by his Cousin Kevin…

… sexually abused by his Uncle Ernie…

… and tempted with drugs by an acid queen.

Despite it all, Tommy survived and became a popular public figure. Thanks to his prowess at pinball, he built the type of name recognition a first-time candidate needs in order to win.

His popularity as a pinball wizard made Tommy a sensation, something that would put him on the map as a potential candidate: They worship me and all I touch.

And then Tommy’s miracle cure made headlines and put his name in front of even more people: Extra! Extra! Read all about it. The Pinball Wizard in a miracle cure!

Tommy’s popularity continued to grow, attracting legions of starstruck fans such as Sally Simpson: Sally just had to let him know she loved him and leapt up on the rostrum. She ran across stage to the spotlit figure and brushed him on the face.

Tommy welcomed a diverse group of followers — milkmen, bakers, seniors, shoemakers and more — into his fold, a sign that he has the broad appeal it takes to win at the polls.