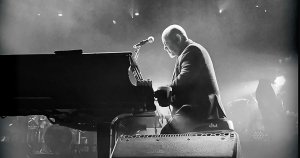 References to the New York Times and the (New York) Daily News in “New York State of Mind” are the most obvious connections between Billy Joel’s lyrics and the world of journalism. But journalists also can find connections in several songs from the Piano Man’s extensive catalog. As Joel celebrates a birthday this weekend, here are five of his compositions that will resonate with the hard-working members of the Fourth Estate.

The Entertainer: Joel sings about the frustrations of being a musician in this composition from his 1974 “Streetlife Serenade” album, but the lyrics could easily apply to the craft of journalism: “The things I did not know at first, I learned by doing twice.”

And any reporter who ever put blood, sweat and tears into a story only to see it cut in half due to space limitations can identify with these lines:

It was a beautiful song but it ran too long
If you’re gonna have a hit you gotta make it fit
So they cut it down to 3:05

Angry Young Man: Joel’s “angry young man with his working class ties and his radical plans” sounds a lot like many journalists, and the parallels in this track from his 1976 “Turnstiles” LP continue throughout the song: “He refuses to bend he refuses to crawl, and he’s always at home with his back to the wall.”

Pressure: There are no deadlines like news deadlines, and “Pressure” from 1980’s “Nylon Curtain” album sums up the feelings that come over reporters as the clock ticks closer and closer to deadline:

You May Be Right: Reporters take risks. They report from war zones, natural disasters and active shooter sites – and they take pride in doing so, much like the narrator of this song from 1980’s “Glass Houses” album:

Honesty: This song from 1978’s “52nd Street” LP is about honesty in romantic relationships, but reporters who struggle every day to find the truth amid stonewalling, alternative facts and lies can identify with these lines: